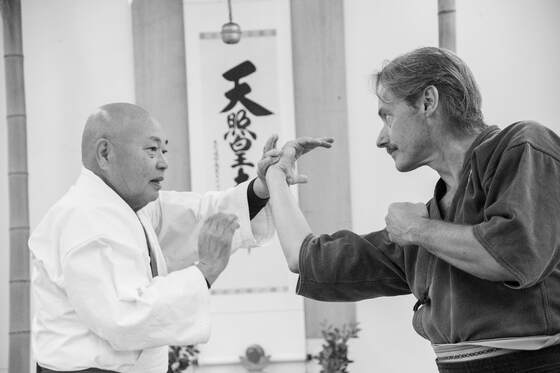 Unsui Sensei, teaching Jutte at Dojocho seminar 2018.
Unsui Sensei (born - Manaka Fumio) has studied martial arts for over 60 years. He's a retired military Lieutenant Colonel and continues preserving and transmitting these culturally significant arts to the next generation. He resides in the town he grew up in, Nodashi, Chiba prefecture, Tokyo, but also lived in Baltimore USA for several years as well as other cities around the world due to training and deployments during his military career.

He was the first student of Masaaki (Yoshiaki) Hatsumi Sensei's (Bujinkan Soke). Hatsumi Sensei saw his potential at a Judo competition in Nodashi, which the young Manaka Fumio (Unsui) won at the age of 14. Hatsumi Sensei was so impressed with him, both as a Judoka and a young man, that he asked him to begin training under his guidance in the Samurai and Shinobi arts he had inherited from Takamatsu Sensei. Years later, Unsui Sensei was lucky enough to meet with and train under Takamatsu Sensei on more than one occasion.

In 1996, Unsui Sensei began his own organisation/community (Jissen Kobudo Jinenkan) of like-minded students in order to train in the authentic and traditional ways he had begun his own training in, all those years ago.

Today, the Jinenkan is a thriving, but small organisation of teachers and students from all corners of the globe. There are dojo's in Oceania, Asia, Europe, Africa and North America. These teachers and students come together to train with Unsui Sensei at the Hombu in Nodashi several times a year.
Powered by