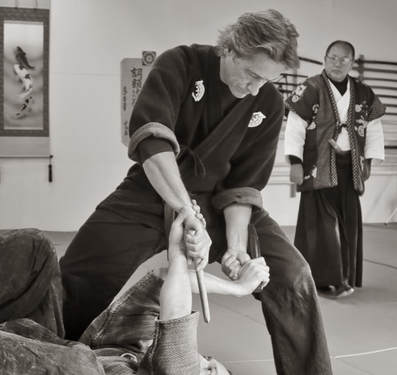 Dojo cho, Travis de Clifford, being observed by Unsui Sensei - Hombu training 2013
Travis, is a passionate father, surfer, runner and student of human movement.  He's endlessly intrigued and in awe of our body's abilities, whether it be martial, dance, parkour, or simply watching his children play and learn through the joy of movement.  To ensure his students get a taste of authentic Japanese training, Travis, organises intensive 7-10 day training trips to the hombu in Tokyo, Japan for his students or anyone interested in experiencing the traditions, culture and authentic atmosphere of true Japanese Kobudō, with the organisations Kancho, Unsui Sensei.
​
Travis (martial name, 'Katsuyoshi' - "Strong Loyalty", given by Unsui Sensei), has been travelling to Japan since since 2003.  Over the past several years, he has taken two trips each year to increase his study-time with Unsui Sensei, in Noda, Tokyo, Japan.  In 2015, he acheived the rank of Sandan (3rd dan) and is now Dōjō-chō (licensed teacher) of the Kenshō Dōjō, currently located in, Jan Juc, on the Surf Coast, Victoria, Australia.

The Kenshō Dōjō's objective, is to share the values and treasures of Japanese Kobudō.  Our dojo name, "Kenshō", means, "seeing one's own true nature" and is usually translated as, "self-realisation" or, "first enlightenment".  These classical Japanese arts are still relevant in modern society for many reasons, not least of which is the basic necessity for real world self-defense.  However, these techniques and training methods are an invaluable vehicle for our health, wellbeing, insight, inspiration and personal growth.  To refine ones character and build integrity, passion and purpose in our lives, both spiritually and personally, is a worthy goal.

​Jissen Kobudō Jinenkan, in Australia, began in 2008 with Maurizio (Morris) Mandarino.  After nine years at the hombu (headquarters) with Unsui Sensei, Morris moved back to Australia and started his own dōjō, Sessa Takuma.  At the end of 2012, Morris moved interstate for work and further international travel and appointed, Travis, as instructor and  caretaker of his classes.
Powered by